Home » People with disability in Vietnam 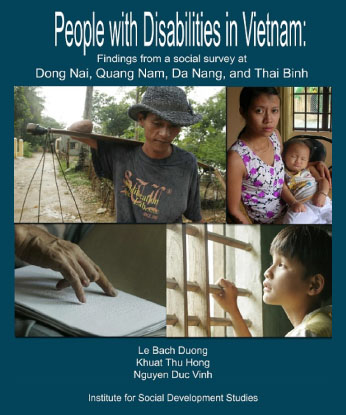 People with Disabilities in Vietnam, funded by the Ford Foundation in 2006, was carried out to examine the economic and social situations in which people with disabilities (PWD), including those who were likely to have been affected by Agent Orange, live and work in high-prevalence provinces in Vietnam namely Dong Nai, Quang Nam – Da Nang, and Thai Binh. The study was constructed on the concept that disability is a status of multiple vulnerabilities experienced by PWD, and can be caused by both physical/mental disabilities as well as by the attitudes of society towards PWD. 8068 households (more than half had members with disabilities) and 5497 individuals with disabilities in 49 rural and urban communes in the selected research sites participated in the questionnaire surveys and 100 key informants were in-depth interviewed. The research demonstrated the disadvantages and vulnerability of PWD in various spheres of life, including the stigma and discrimination that they experienced, and from there provided strong evidence-based recommendations.